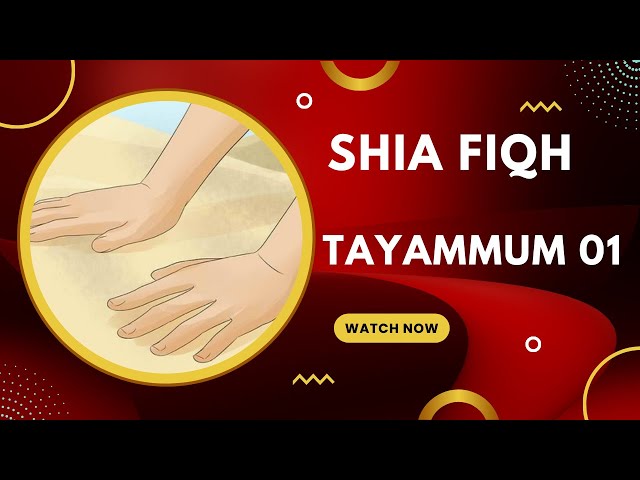 Tayammum should be performed instead of Wudhu or Ghusl in the following seven conditions:

1. When it is not possible to find sufficient water for performing Wudhu or Ghusl.

2. If a person is unable to find water on account of old age or weakness or due to fear of a thief or a beast or because he does not possess means to draw water from a well, he should perform tayammum. The same order would apply in case the trouble to acquire water is usually considered to be unbearable.

3. If a person fears that if he uses water his life will be in danger or he will suffer from some ailment or defect in his body or the ailment from which he is already suffering will become acute or some complications will arise in its treatment. However, if warm water is not injurious for him, he should perform Wudhu with it and also do Ghusl with it in cases in which Ghusl is obligatory.

4. If a person fears that if he uses water to do Ghusl, or to perform Wudhu, he will be involved in hardship, he should perform Tayammum under the following 3 cases:

In case he fears that if he uses the water for Ghusl or Wudhu, he will be involved in an acute thirst, which may result in his illness or death, or which it will be very hard for him to bear;
In case he fears that in the event of his doing Ghusl or Wudhu, the people whose care is obligatory for him may become ill or die on account of thirst,
and, In case he fears, on account of lack of water, for others ( whether human beings or animals ) besides himself, and their death, illness or restlessness is unpleasant for him.

In the absence of anyone or more of the three conditions mentioned above it is not permissible to perform Tayammum when water is available.

5. If the body or dress of a person is impure and he possesses only so much water that it is likely to be exhausted if he takes a bath or washes his dress he should, on the basis of precaution, take a bath or wash his dress, and offer his prayer after performing Tayammum. However, if he does not possess anything with which to perform Tayammum he should use the water for bathing or for Wudhu and offer his prayers with impure body or dress.

6. If fetching water would mean humiliation and insult for him.

7. If fetching water would require him to pay high price for it.

8. If a person possess unlawful water or container, he should perform Tayammum instead of Ghusl or Wudhu.

1. Niyyat: I am doing Tayammum in place of Wudhu or Ghusl, so that my prayer or fast may be correct, Wajib or Sunnat Qurbatan ilallah.

2. Strike palms of both hands together upon things on which Tayammum is correct. Just putting the hands upon earth etc. is not enough.

4. Then pull the left palm upon the back of the right hand from the projecting small bone on the joint of palm and arm up to the fingertips.

5. Then pull the right palm on the back of the left palm likewise.

6. Strike the palms together upon earth etc. second time.

7. Pull the left palm on the back of the right hand, as explained above.

8. Pull the right palm on the back of the left hand, as explained above.

While performing tayammum one should remove the ring he or she is wearing and also remove any obstruction which may be present on his forehead or on the palms or back of his hands.